There is no doubt that by the time William Henry Douglas Flack died on 10 March 1936 in Burnley, Lancashire, he had achieved a great deal more that might have been expected of the son of an immigrant Irish soldier in late Victorian England.

Perhaps the best evidence of his rapid rise in Burnley society can be gained from the obituaries that appeared in the Burnley newspapers. 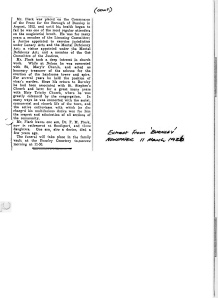 William HD Flack had spent all of his working life working in the bank, rising to the rank of Branch Manager of the Manchester & County Bank before his retirement in 1922. The letter from the Bank granting him his pension is reproduced below.

Following an enquiry with the Hospital authorities In 1980, the senior administrator of Victoria Hospital wrote, proving a summary of the service given by WHD to the hospital between 1909 and 1933. The letter particularly mentions Mr Flack “being responsible for raising and managing voluntary contributions for the hospital”. The letter is reproduced below.

William Henry Douglas Flack JP also served on the Magistrates bench from 1913 to the date of his death and a formal resolution of thanks for his service dated 11th March 1936 was presented to the family. A copy appears below.

A life not without sadness and estrangement.

From all the evidence presented so far, it could be concluded that William HD Flack had a successful and prosperous life, but the full story may be somewhat different.

Just a few years later, on 23 May 1900, William HD Flack (Bank Manger) purchased a nearby double plot grave 9233 and 9234 to bury his wife Eliza Alice Flack (nee Parker) who was buried the same day aged 46 years.

But his sadness was to compounded in the years that followed by the loss of his son Bertram, who, having survived active service as a Naval surgeon in the First World War, was struck down by the Flu Epidemic in 1919 at the age of just 37. 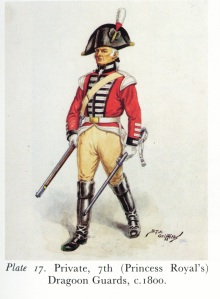 In my blog entitled “Is Corporal William Flack of the Wexford Militia my William Flack’s Father?“, I asked the question, the answer to which remains, “He could be, but we can’t be sure”. So what other alternatives are there?

In May 2014, the Irish Military historian, Mal Murray, located and brought to my attention the military records (see below) of a William Flack, of 7th (Princess Royal’s) Dragoons dated 1797 which records that Number 17, Trooper William Flack aged 20 was a member of Captain Francis Dunnis Troop of the 7th (Princess Royal’s) Dragoons. The record states that William Flack, a weaver, was born in County Cavan, Parish of Killincare and was enlisted on 11 March 1793 at Kells by Sgt Dillon(?). 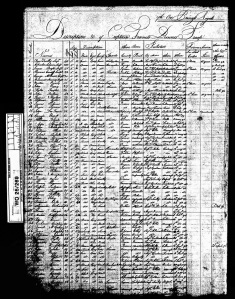 An examination of the history of the 7th (Princess Royal’s) Dragoons shows that the 7th remained in Ireland throughout 1793 and it was not until April 1794 that a “composite service brigade” made up of the seven cavalry regiments in Ireland were embarked in Dublin for England in anticipation for active service against the French in the Netherlands. It is not clear whether Capt Dunnis’s Troop were part of the “composite brigade”, but in any event, the deployment to the Netherlands did not proceed and the composite parts were returned to their units in Ireland in April 1795.

At the outbreak of the Irish Rebellion in 1796, the records show that the Regimental Headquarters and five Troops of the 7th were located at Tullamore (Offaly) and another four Troops at nearby Phillipstown. The Regimental History records that the 7th were involved in the battles of Rathangan, Kilbeggan and Vinegar Hill. By October 1798, the 7th was back at its Tullamore Depot.

From August 1799 to 1805 the Regiment served in England and Scotland, where the 7th was stationed in Northampton, Edinburgh, Manchester and Birmingham. After a further 4 years back in Ireland, the Regiment was again posted to the Midlands where they played a part in the suppression of the industrial unrest that broke out in the cotton manufacturing and coal mining districts of the North.

The 7th Dragoons did not serve either in the Peninsular War or in the final campaign to defeat Napoleon and remained on garrison duties and “in defence of the civil authority” throughout the Napoleonic Wars.

Is it possible that this William Flack is my William “Billy” Flack’s father? The following points need to be considered:

Commentary on the historical context.

It was noted by the Regimental historian J.M. Brereton, writing in 1982,  “The dreadful atrocities committed by Catholic and Protestant and – more shamefully – by the forces of the Crown, left a festering sore which has not healed to this day.” “As for our two regiments, whether or not they were involved in the barbaric reprisals and outrages, they performed their duty loyally in the most trying of circumstances a soldier can be called upon to face: a civil war against his own countrymen.” “Out of the 76,000 government troops involved in the Rebellion, only about one fifth [ or 15,000] were English.” The great majority were Irishmen.

Unfortunately, I have not been able to locate Tpr William Flack’s enlistment papers, service record or any pension papers.