In my post entitled “Flack Surname Study – Ireland” it was found that the most promising lead generated by that surname study,  that might help in establishing who were William “Billy” Flack’s family, was the records of several Flack families living in “Lurganbane” and “Luganbawn”, town-lands, 2.4 km or half an hour’s walk south of Bailieborough. The map reproduced below shows the locations referred to.

The earliest record of Flack families living in these two town-lands located so far is the Flacks listed in the Tithe Applotment Books which were compiled between 1823 and 1837 which list Hugh, John and Robert Flack of Lurganbane.

The Griffith’s Land Valuation which was completed in County Cavan some 20 years later in 1857, listed a John and a Robert Flack of Lurganbane. Hugh Flack was not listed.

Although there are several references to Flacks in other records, these are the only historical sources that specifically refer to Flacks living in either Lurganbane or Lurganbawn.

The following grave transcripts from Corglass Presbyterian Church refer to members of the Flack families from Lurganbawn and Lurganbane. It will be noted that Corglass Church is about 4.8km north, or about an hour’s walk from Lurganbane/Lurganbawn.

“In Loving Memory of John Flack, Lurganbane who died 10th April 1895 aged 66 years. And of his son Robert, died 4th August 1911, aged 23 years. “Home to Jesus home to glory all their pain and toil is ore. Home to rest with Christ for ever on that peaceful happy shore” Erected by the Family.”

Photographs of the grave stones and church yard are reproduced below. 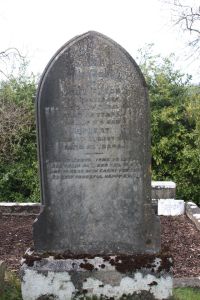 Enquiries continue to determine whether a link can be established between these Lurganbane/Lurganbawn families and William “Billy” Flack.

1 thought on “Did William “Billy” Flack belong to the Lurganbawn/Lurganbane Flacks?”